Photos from our vacation to Kenya in March 2010
The Trip of a Lifetime
In the summer and early fall of 2009, my son said he was going to take me to Kenya in early spring 2010, as long as I got myself into good shape for the trip. I said "sure, sure", and continued to be my usual lazy self. I really didn't think it would happen, since there were so many other things on our plates - work-wise and family-wise.
My son, on the other hand, continued to make the promise of Africa every time we talked.
This repartee continued throughout the fall of 2009, right up to Christmas. At that point, my son said that the trip would happen immediately after the Olympics. He couldn't take leave before then, because of his work. Mona (the one who rules) said.."You should go. It will be the trip of a lifetime to go on safari with Ashley." Of course, she who rules is always right! So...I committed to go.
Then, Mona suggested to us that we should invite the uncles to come along. Well, another good idea! Ashley sent everyone an e-mail on Dec. 27th, inviting them on the trip. This is what he wrote:
"I hope everyone had a good Christmas and is looking forward to the new year. Things have been getting pretty busy for me on my end, and will only get more hectic with the lead up to, and during the Olympics.
So I've finally had a chance to find out when my Olympic Leave Restrictions end, and also when we might be able to pull this trip together. As it sits right now, I work March 6th, and am ready to take off anytime after that. I was hoping that we could roughly plan something from March 7-21, giving us a full two weeks out there. Obviously things are fairly flexible so give me some feedback about what you giuys think. I know some of you are still thinking about whether this trip can pan out for you, so i'll keep everyone in the loop regardless. Also, if I can shift things around to make sure we all have a chance to do this, I'd love to make it happen for us all. I think it'll be a great "guys" trip.

The rough plan is to head out to Kenya for two weeks.

Recently Dad and I were talking and we though it might be nice to fly out to London, spend the night there, and then continue on to Nairobi, the next day. Just a thought for now.

Once out there, we will do either a 3-6 day safari hitting Maasai Mara, Serengetti, Tsavo. We'll head to the Western Province in Kakamega and Shikokho to catch up on some projects that Imbenzi and I have on the go out there and for you guys to see real rural Africa. While in Western Province we'll hit the Kakamega Rain Forest for a day trek or two before we head back to Nairobi.

If everyone is interested, we can boot on over the coast in Diani Beach and catch a Dhow trip on the Indian Ocean with a seafood feast. Its all pretty awesome stuff out there.

And as I said earlier, everything should be fairly inexpensive, with the airfare being the most costly (approx 1700), followed by the safari (approx.300-600 all inclusive). While in Western Province our accomodations are free with Imbenzi's Base Camp and Headquarters out there. Coast is cheap with just the cost of the hotel and the dhow trip being about 50 bucks.

Anyways guys, if anyone has any questions just send me a message and i'll get back to you."

Well, things happened, and life got in the way. We had some family misfortune, family loss, and a lot of misery. Throughout it all, we remained committed to doing the trip. It was like a light at the end of a long tunnel.

When everything had settled, we had 7 of us going on our trip of a lifetime. 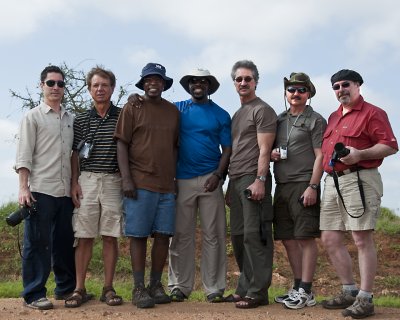 The Gang
THE CREW
(left to right)
Ashley "Makin' History"
Gerry "Vernon Viper"
Imbenzi "The Infiltrator"
Jason "Jazz Hands"
Luc "The Local Legend"
Norbert "The Debt Collector"
Ian "The Father Figure" McMillan
0 comments leave a comment
The Photos
I intend to tell the story of our trip, and to provide photos as well, so it's important to give a disclaimer right now.
I HAVE NOT TAKEN ALL OF THE PICTURES THAT ARE BEING POSTED TO THIS BLOG.
Everybody on the trip brought a camera of some sort, and I've collected all the shots taken to use in producing this Blog. Credit belongs as follows:
1. Ian - Pentax K10D
2. Ashley - Pentax KM
3. Norbert - Pentax Optio MX04
4. Imbenzi - Nikon D90
5. Jason - Olympus ST8000
6. Luc- Olympus C750
7. Gerry - Sony Videocamera
0 comments leave a comment 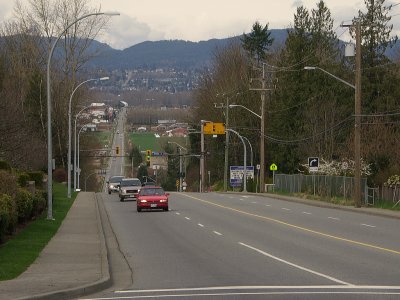 Goodbye to Abbotsford
Our "group of Seven" came from Vancouver, Langley, Abbotsford, vernon, and Winnipeg. It made the logistics of leaving interesting, but in the end we all decided to fly out from Vancouver on the same flight. So, the Winnipeg pair came to Abbotsford and we left together.
Our flight was leaving Vancouver at 8:30 pm and flying to Amsterdam, where we would stay overnight before flying on to Nairobi.
0 comments leave a comment 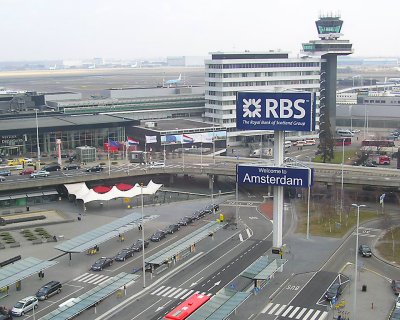 Welcome to Amsterdam
We flew all night - 8 1/2 hours in total - and landed in Amsterdam at 3:15 local time. No big shocks to the system yet, since Amsterdam's weather is about the same as BC. Still, we were on our way and excited!!
Tomorrow would bring the Africa leg of the trip, but for now it was time to do a quick exploration of Amsterdam....
1 comment leave a comment 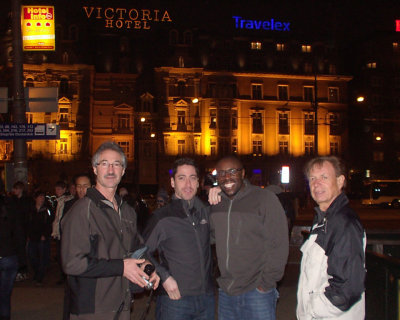 A Night on the Town
It's March, remember!
A night on the town in Amsterdam is a pretty cold experience in March, but the boys did it!
I,on the other hand, stayed in the hotel and read a book, like a true father figure.
0 comments leave a comment 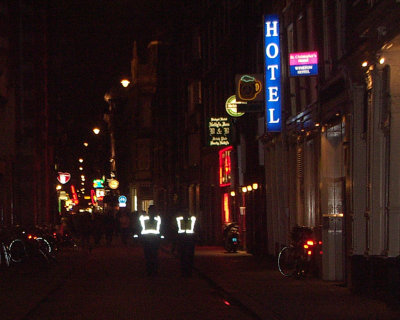 Did they go...
to the Red Light District? Yes...
Not much to see, and no, they didn't do anything crazy. At least, that's what they told me.
0 comments leave a comment 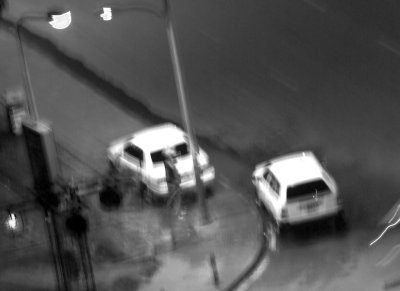 Arriving in Nairobi
Our flight from Amsterdam took 8 1/2 hours, and we got into Nairobi about 8:00 in the evening. It was already dark, and we were pretty jet-lagged by then.
Getting into Jomo Kenyatta airport is quite an experience. It's old, and fairly run-down, but still works. What's unusual, of course, is that you are in an African country and the processes all work a lot differently than you would be accustomed to at home. Ashley gave us a phrase to remember this.."TIA - this is Africa".
It didn't take long for the baggage, but getting our entry visas was a first for all of us. Still, we got them, paid our $25 US, and headed to the hotel.
We were met at the airport by Imbenzi's brother Duncan, and our driver Tom. Tom was to be our driver for the next week and a half. More on him later.
All we had energy to do, once we got to our hotel, was have a Tusker and head off to bed. Safari starts tomorrow!
So...we all headed up to our rooms after a beer, and got settled in. we were on the 12 floor and our window looked out onto Uhuru Park and one of the main streets.
I looked down at the street corner, and saw 2 people getting water from a ditch and washing cars! Right on the street! I couldn't imaging how those cars would look in daylight, after getting washed with ditch water...apparently, cars are washed like this all the time in Nairobi.
Like Ashley said "T.I.A." (this is Africa)
0 comments leave a comment 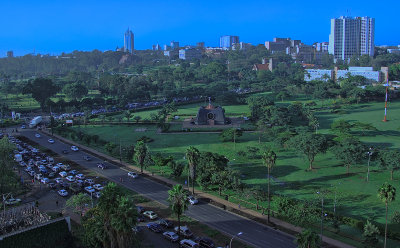 Nairobi
Like most first-time visitors to a place, I came with all my "baggage". You know...pre-conceived ideas about Africa, Kenya, and of course, Nairobi.
Downtown Nairobi is a modern city just like you would find anywhere else in the world, with parks, streets, and traffic. In fact, traffic here is just as crazy as London or Paris. Here's a view from our hotel window, showing the morning commute getting started.
2 comments leave a comment 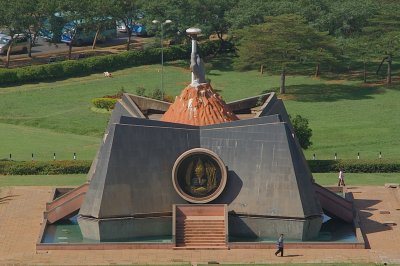 The Kenya Independence Monument
In the previous picture, you saw a shot of Uhuru Park. The large structure in the scen is the Kenyan Independence Monument. I didn't know anything about it, but found this information on Enchanted Landscapes.com
Built in 1988 to commemorate 25 years of independence, the Independence Monument is a marble rendering of the lowering of the British colonial flag and the raising of the Kenyan flag. It cost nearly a million dollars to construct and caused a lot of controversy.
Location - Uhuru park along Uhuru Highway, near the Nairobi Serena Hotel.

The monument, after several years of neglect, has now received a face lift restoring it to it original grand state. It still remains a busy place with all manner of enterprise taking place around it. The Independence Monument stands as a reminder of the grand moments in the history of the land when a nation stood up in pride to proclaim itself free.

For the lover of history, visiting the site might just present a nice opportunity to travel back in time a capture a glimpse of Kenya's past. While here you can experience the thriving small-scale business activities as freelance photographers, candy, icecream and quick snack dealers busy themselves trying to earn a living by selling their ware to the numerous visitors to the park. The well trimmed lawns are a great spot for groups, couples and individuals alike to spend some quality time together. The new city street lighting project has made the park where the monument is located a safe place even at night.
1 comment leave a comment 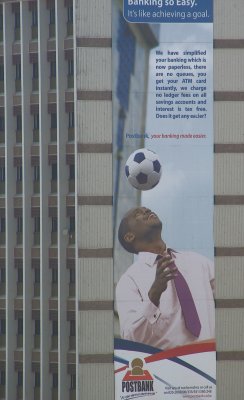 Romantic Ideas and Reality ....
People my age grew up on old movies with Humphrey Bogart like "The African Queen", and of course all the "B" movies showing darkest Africa, where time stands still...Of course, it's absolute baloney nowadays..
Looking from my hotel room window in the morning showed a big city with all the sights you would expect to see anywhere in North America - morning commuters jamming up the streets, green parks for people to enjoy the outdoors, modern buildings climbing up to the sky, and...advertising..
This banner is over 8 stories high, and is promoting ATM's and electronic banking. And yes....we had no problem finding bank machines while we were in Kenya.
0 comments leave a comment 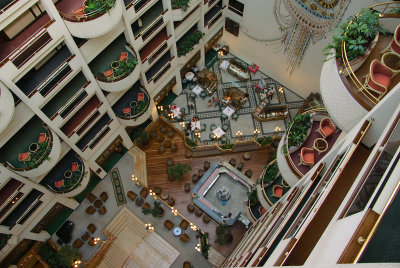 The Laico Regency Hotel
Our hotel in Nairobi was the Laico Regency. We ended up using it as our base for the trip, staying there on arrival, then again after transiting from the Western Province to Mombasa, and again the night before we left to come home.
We were 2 people to a room, and breakfast was included in the cost, which was $221. So, it worked out to $110 each for bed and breakfast.
The hotel is pretty upscale, and we weren't roughing it, so to speak..Here's a view of the atrium from our floor.
0 comments leave a comment