One of the most challenging yet rewarding aspects of wildlife photography is to create expressive images that stimulate different emotional responses, particularly as they relate to our own experiences in everyday life.

Occasionally I witness this response as I am taking the photograph, but quite often it isn’t until I review and reflect on the images that this parallel is drawn.

Here are some images that I have prepared - feel free to leave a comment with any thoughts that you may have. 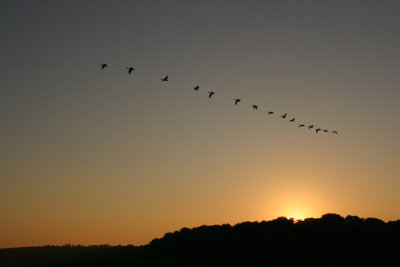 Teamwork
Geese and other migratory birds fly in formation patterns to reduce drag which ultimately reduces fatigue that these birds inevitably experience during long flights. The lead bird feels the full brunt of the oncoming wind while the others behind experience less drag, and as a result, formations of birds can fly significantly further when working together as a team as compared to flying alone. The lead bird then drops back and works its way to the end of the formation and the second bird assumes the lead role. A very interesting article on Leadership Lessons from Geese can be read here: ( http://www.thepracticeofleadership.net/2006/07/18/leadership-lessons-from-geese Sometimes looking towards the natural world can emphasize the importance of working together to achieve a common goal.
0 comments leave a comment 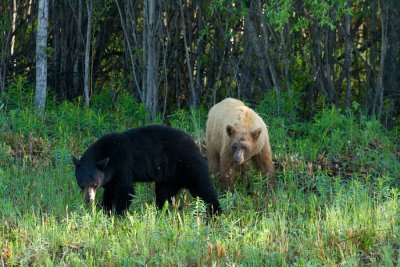 Different, yet the same
My wife and I were driving on the Alaska highway when I noticed these two bears on the side of the highway. At first, I couldn’t contain my excitement - I was going to have the chance of photographing a black bear and a grizzly bear - in the same frame!!! I must have taken 30 or 40 images of these two bears peacefully foraging on roadside plants. Well, doing some research, and talking to other people familiar with bears, it turns out that both of these bears are black bears (Ursus Americanus). The coats of these bears can range from black to cinnamon-brown, to blonde, to a rare bluish color (referred to as a glacier bear). To me, an interesting lesson was learned that can be applied to everyday life - don’t jump to conclusions about others, for we all may be different on the outside, but deep down inside we are still very much the same.
0 comments leave a comment 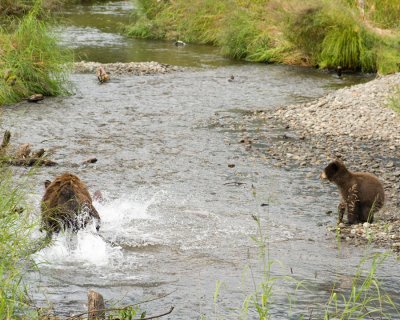 Learning from Mom
This young bear was watching his dedicated mother catch fish: studying her every move with intense concentration and rightfully so; his survival will depend on it one day. For now he may have the luxury of the food being brought to him, but in another year or two, he will be on his own. I’m sure we all can think back and identify many people that have helped us learn and grow into who we are today.
0 comments leave a comment 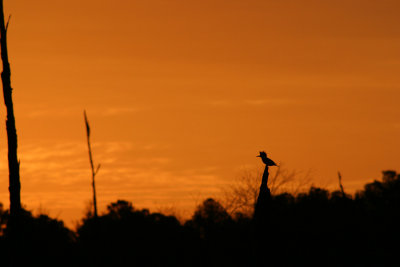 The Silhouette
I love observing birds, and I love photography, so it would make sense to assume that I love bird photography. Well, as it turns out, I don’t. Ask wildlife photographers what they think is the most challenging subject, and I will be willing to wager that a majority of them will say birds. Most of them are very small, move very quickly, are easily spooked, the list can go on and on. I was photographing the sunrise one morning on a local trail when I heard the unmistakable cry of a kingfisher. I have never photographed one before, and waited patiently for it to come into view. Sure enough, it perched itself on a dead tree for several seconds, and I was able to capture a couple of frames before it flew off. At first, I was mildly disappointed because the bird appears so small in the frame, but quickly realized that the formed silhouette is the unmistakable shape of the kingfisher, with its crowned crest and long beak. I have come to really enjoy the image because the habitat become the focus rather than simply becoming a portrait of a bird. The bird being small in the frame appears vulnerable, and in fact, it is. Habitat destruction is a major threat to many species of wildlife, and it is up to us to make a difference so that future generations can enjoy such beautiful scenes.
0 comments leave a comment 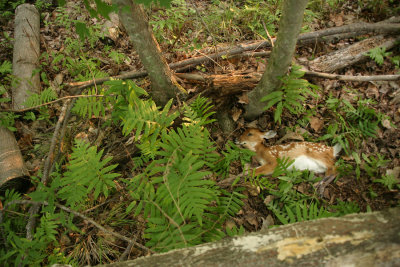 Fragility
I almost didn’t take this photograph. I sat at the scene contemplating for nearly twenty minutes before deciding to take it. Several questions ran through my head: How can this happen to such a young, innocent, defenseless animal? Was it a predator? Did it wander away from its mother? I do not know, and perhaps I never will. This scene illustrates how remarkably fragile life is and that sometimes questions that we may have simply cannot be answered. We all must learn to accept these unanswered questions as one of the many mysteries of life.
0 comments leave a comment 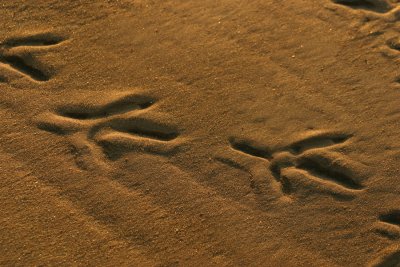 Tracks
Darn! Must have just missed him! Photographing the Great Blue Heron is quite a challenge, as it is a very wary species. Great Blue Herons epitomize patience - they will stand motionless for hours waiting for the right fish to come along. Maybe I should take advice from them and be patient - I’ll get my perfect photographic chance one day.
0 comments leave a comment 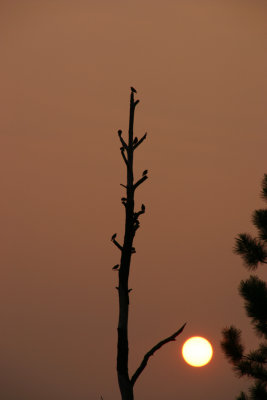 Enjoying the Sunrise
One morning I was photographing a sunrise on the Colonial Parkway in southeastern Virginia before heading off to work, and noticed this group of Starlings perched on a dead tree. It seemed as though they too were enjoying the beginning of a new day, just like I was. Perhaps we should take the time every so often and enjoy the simple things.
0 comments leave a comment 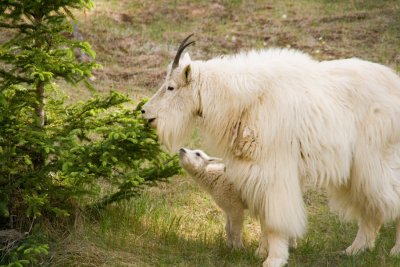 Looking up to Mom
I was photographing a group of mountain goats near Banff National Park in Canada and these two were clearly the star of the show. The little guy and Mom were chomping away on some pine branches when I captured the young goat looking up towards Mom. This picture reminds me of looking up to my parents and I am so thankful for everything they have done for me.
0 comments leave a comment 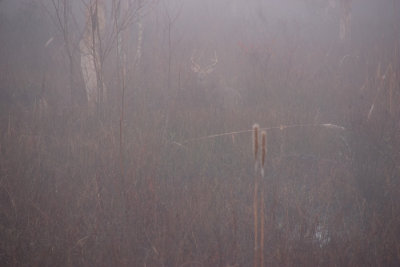 Stealth
“Take your time” should be the moral of this photograph. I was at a local nature trail photographing the foggy landscape of the wetlands. Wetland areas take on an entirely different look in the fog becoming very mysterious and somewhat haunting. The usual flurry of bird activity is replaced by a deafening silence that heightens one’s senses. I was just about to pack up and leave when I heard a faint noise in the distance. It was too loud to be a bird or other small animal. I looked, and looked and saw nothing. I waited and waited. There must be something out there. Just then, I saw a flicker of an ear. A huge male deer emerged from the fog. I was able to capture a couple of images before he fled. I call this image Stealth because big deer do not become big deer by exposing themselves in the open. They need a stealthy approach in order to survive. I’m glad I took my time that morning. I was rewarded with one of my favorite wildlife images.
0 comments leave a comment 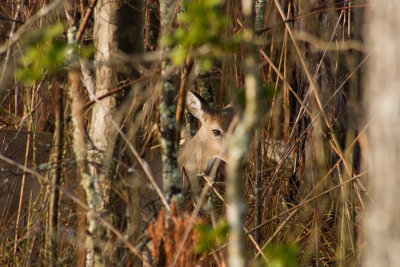 A glimpse..
I was walking down a local nature trail one morning, and it was shaping up to be a beautiful spring day. There were many people on the trail - some were running, some were rollerblading, others were cycling, and I was jealous. I hadn’t been on my bike in sometime so I decided to hurry home and get on my bike and go for a ride. As I was walking back to the car, I just happened to look to my right and caught the glimpse of a young deer hiding in the woods. I stopped, carefully laid out my tripod and captured this image. Deer have a remarkable ability to blend into the forest for protection. People were speeding by and no one had noticed the deer - except for me. If I had been on my bike I would certainly have missed this scene. I decided that I will have plenty of opportunities to ride my bike and spent the rest of my morning walking, slowly, along the rest of the trail.
0 comments leave a comment 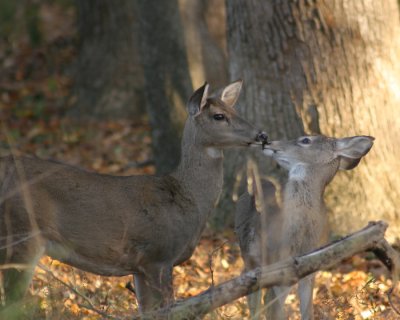 A mother's love
I captured this image of a doe and (what appeared to be) an older fawn engage in somewhat of a “kiss”. I find the look of the fawn to be particularly amusing, as it is almost a look of embarrassment, much as older children are ashamed when parents show affection towards them. It usually isn’t until later in life that we realize how lucky we are to have the unconditional love of someone. Thanks Mom.
1 comment leave a comment 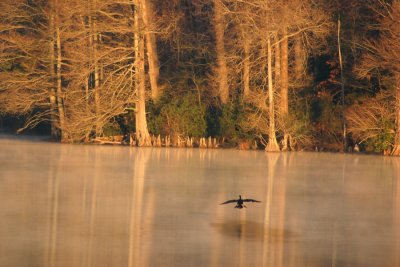 Early arrival
I love mornings. I will usually set my alarm one hour or so before sunrise to allow myself time to get to my chosen photo location. This location happened to be a very nondescript lake in Williamsburg, Virginia, but the lighting that morning was magnificent. Cool nighttime temperatures caused a blanket of mist to hover over the lake softening the reflections of the cypress trees on the shoreline. I was taking picture after picture of the landscape when a whistle came overhead. It was a cormorant coming in for a landing. I was lucky to have a longer zoom on the camera, and I took several pictures as he approached the surface of the lake. Sometimes the early bird gets the worm - or at least the photograph.
0 comments leave a comment