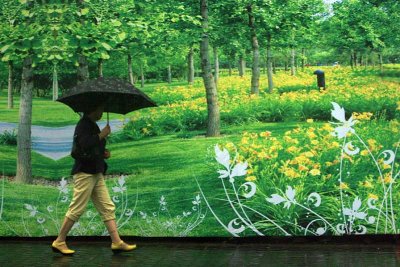 Reality
A woman walks by a billboard in the rain. Reality is often very far removed from the happy promises and illusion that life offers.
3 comments leave a comment 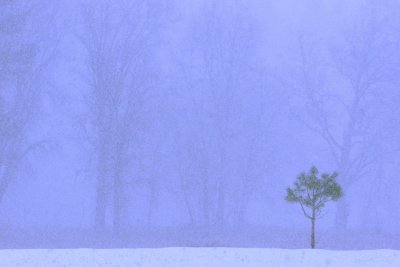 Promise
I was disappointed when I got to Yosemite in February to see that most of the snow in the valley had melted. So when it started to snow, I was very surprised, AND ecstatic! I was finally going to see the Winter Wonderland that I had hoped for. I was photographing from across El Capitan along the banks of the Merced River when the first snowflakes fell. It started to snow heavily but I was so excited that I stayed for a whole hour out there in the snow, and made many images like this.
I experimented with the white balance to express the coldness. And this young fir tree became one of my stories for this wintery backdrop.
3 comments leave a comment 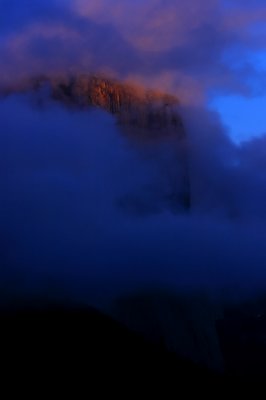 El Capitan's Quiet Mysteries
The normally imposing granite outcrop at Yosemite is shrouded in mystery in winter. I saw it peeking through the clouds briefly during the last moments of sunset.
3 comments leave a comment 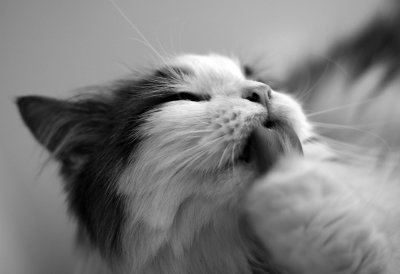 Compulsive Cleaner!
This is my cat Zoey (short for Zoltan), totally self-absorbed in his hourly cleaning ritual. I've never known any other animal that is so obsessed with personal cleanliness! He even has to stop in his tracks while playing to lick any hair which is out of place!
This photo was taken with my 50mm f/1.4 prime lens which I've had for a while but never knew how to use. It was very convenient having Zoey around as a fascinating subject for my experimental learning!
3 comments leave a comment 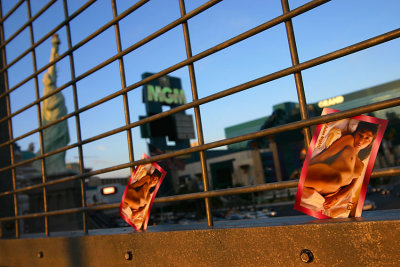 Liberty
Men were giving out these girls-for-sex call cards to anyone passing by, and placed them in every visible nook and cranny all over Las Vegas. It made such a strong impression on me and reaffirmed in my mind Vegas' status as Sin City. Vegas holds nothing back!
I am quite proud of this image as it is probably one of the most sophisticated and controversial images I've made thus far, in terms of ideological content, social commentary and the use of symbols. Please feel free to leave your comments. I'd love to know how you've interpreted this image, and if my point-of-view has come across as well as I hope it has.
7 comments leave a comment 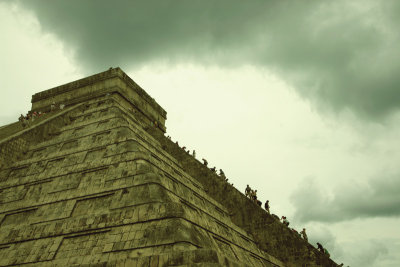 The pyramid of El Castillo, Chichen Itza
This is my tribute to Chichen Itza, which was voted into the top 7 "New Wonders of The World" through a global poll this month in July 2007. I thought it was nearly impossible to inject any sense of mystery and drama to my photo that day, given my circumstances: Chichen Itza is one of Mexico's most visited archeological sites and there were throngs of people! The lighting was disappointingly flat and dull that day; and the stark, treeless, well-manicured lawns hardly suggested the atmosphere of a "lost civilization" in the jungle. Then towards the end of my visit, the rain clouds came and gave me a much needed dramatic backdrop for my image!
5 comments leave a comment 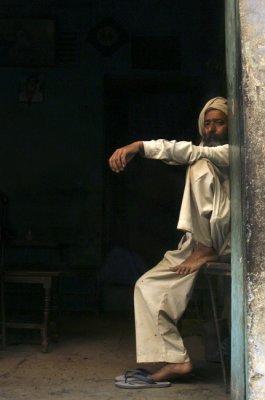 Portrait of An Indian Man
This is one of my favourite images from India simply for the fact that I've never made a portrait like this before. One of the things I love about it is that it is reminescent of Rembrandt's paintings - with its natural soft lighting from a doorway, the dark background and the model's purposeful pose. This portrait looks very much like a planned photo session - where I was right there in his personal space, having him posing and looking directly into my lens. This infact couldn't be further from the truth - This portrait was in reality the lucky result of a happy snapper passing by in a car! He came into my view for a second and then he was gone. And it is perhaps the incongruity of the finished image and the context in which it was created that made such a deep and memorable impression on me. I don't think I deserve any credit for this image - this time I believe it was pure luck!!!
6 comments leave a comment 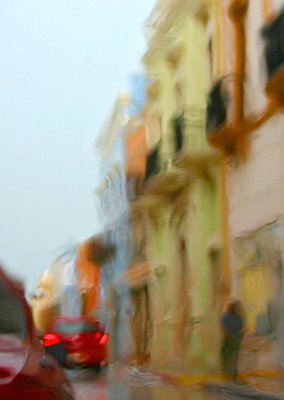 Impressionist Campeche
It was raining and flooding when we first arrived in the beautiful and colourful UNESCO city of Campeche. I was not eager to leave the comforts of my dry car seat to run through the rain over to our hotel, which you can see as the blue building in this image. So while we waited the rain out in the car, my husband suggested making photographs through our wet windscreen. It was a wonderful idea that resulted in one of the most abstract, yet completely realistic images I've ever made. No special photoshop effects or filters were used for this shot, except for the raindrops trickling down our windscreen. The effect was amazing, completely transforming Campeche into an Impressionist painting. I discovered that focusing on the raindrops yielded the best results. Being stuck in one position in the front car seat did limit my angle and I had to crop this image quite a bit to get it the way I like it. Out of the 10 shots I made, I like this the best because the bright rear lights of a passing car added some incongruity and realism to this otherwise painterly image. It had been raining for the last 3 days here in Kuala Lumpur, and I thought it apt to post my most expressive rainy day image I 've made recently. This image sprang to mind because I will never forget the abstraction, mood and colours I captured in this delightful experiment during my first experience of Campeche.
8 comments leave a comment 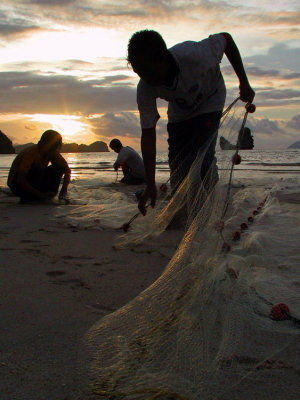 Packing Up
These young fishermen came back empty-handed, yet they did not show any signs of frustration - today was just one of their unlucky ones and they appear to accept their fate gracefully. As the day drew to a close, they gathered their nets with a great sense of calm and cooperation. But I on the other hand, was shaking with excitement! This was a fantastic photo op! I had not expected to see fishermen here because this was a very quiet part of the island where you would only find a handful of people at any one time - mainly tourists from an exclusive resort nearby. The challenge for me was getting a good photo shooting 1) against the sun 2) in low lighting, and 3) quickly too, because within minutes these boys had swiftly rolled their nets up and walked away. I was very thankful for my flipout viewfinder which made it possible for me to shoot from the ground, compose and assess my exposure "live" without having to stick my face into the sand. I think I did quite well - my only gripe was I could not allow more space next to the guy on the left - another tourist was standing right there as feverishly excited as I was, videoing away! Although I shot this almost 4 years ago, it was a memorable moment that has stayed with me. And it has become one of my favourite working people pictures! After sitting in my "Inbox" here for about 2 years, this image has finally found a home here, at least temporarily!
9 comments leave a comment