2016-2017 Summer in Australia can be very changeable with quite a few heatwaves and temperatures in the 40s, this summer so far has been mild with quite a lot of rain and my rose garden is enjoying the respite
from the heat. As long as I keep up with dead heading there are new buds forming. 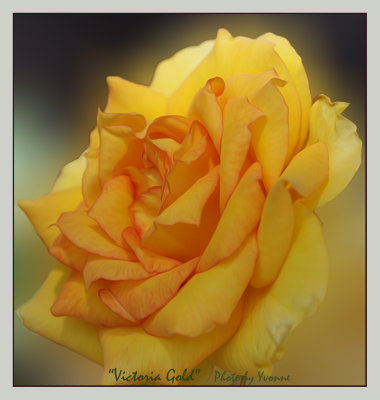 "Victoria Gold"
One of the special features of this rose is the edging and infusion of vermilion that only occurs
now and then, but was the reason I originally bought this rose to add to my collection.
Initially I saw this rose growing in the Victorian Rose Garden, Werribee as a beautiful
hedge circling a rotunda in the centre of the garden, what a performer it was there!
It also features on the big Australian race of the year, held at Flemington, also
in Victoria, Australia. 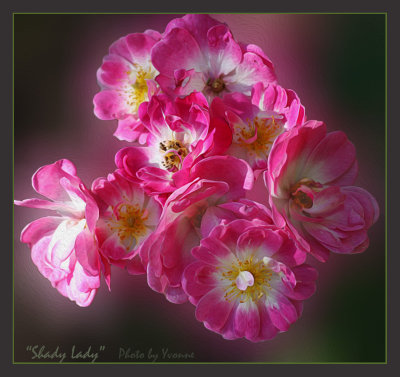 "Shady Lady"
This rose is good value, often covered in blooms it makes a wonderful display several
times a season. I have several bushes of this rose. You do have to keep up with
dead heading of course otherwise you don't get the quick repeat. 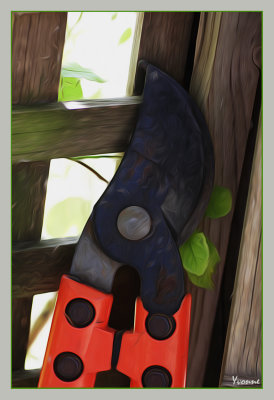 My Loppers
They are at present in the gazebo and this is where I took a photo of the top
section of them as they leaned against the trellis ready for use. You might
notice this photo was taken earlier in the week before the snake episode, and
they'll be staying there until we're sure our visitor has left the premises! 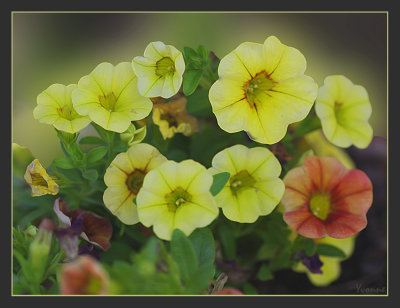 Calibrachoa "Fireworks"
A mixture of colours. I'd only just replanted the pot that sits on the outdoor table
in the gazebo.. sitting down with my mug of freshly brewed coffee when out of the
rose garden a snake emerged just a few feet from mine... a very venomous variety that
exist in our area but is rarely seen. Luckily I had my mobile phone in my pocket
and could phone Dick to alert him to keep Flossie inside while a snake was passing
through. Jack Russells are known for attacking reptiles, mice and rats, but
a bite from this type of snake could kill her unless we got her to a vet promptly. We
then worked out the safest way for me to return to the house without going near
the snake which had disappeared into the nepeta that grows on the edges of the main
pathway to the gazebo. Flossie is now having a short holiday with our daughter until
we're sure the snake has moved away. 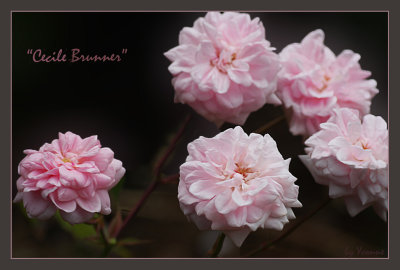 "Mademoiselle Cécile Brünner"
This rose is included in the World Federation of Rose Societies Old Rose Hall of Fame.
The Old Rose Hall of Fame recognizes roses of historical or genealogical important
and those roses which have enjoyed continued popularity over a great many years.
Dedicated to the Cécile Brunner (1853-1927), sister of Ulrich Brunner fils, or
possibly to his daughter Cécile (b. 1879).
[Notes from Help Me Find Roses]
My notes follow.
I believed I was buying a low growing bush, but my plant is as tall as I am,
taking many years to reach this height. Continuously in flower throughout
the long rose season. 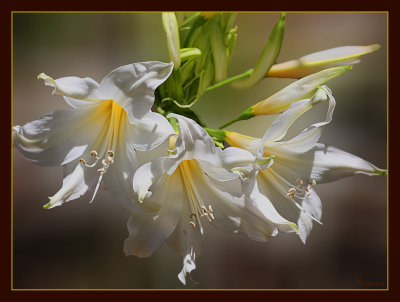 The Belladonna Lily, cream
This is my favourite lily, rather late flowering this season, but I managed to
get this photo in the mid-day sun on today's late summer's day.
~ Amaryllis Multiflora Alba. ~
It is surrounded by roses of a similar toning. 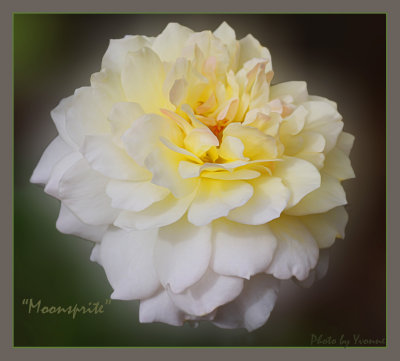 "Moonsprite"
Bred by Herbert C. Swim (United States, 1956).
Introduced in United States in 1956 as 'Moonsprite' a floribunda.
Cream, golden-yellow center. Strong fragrance. 80 petals. Average diameter 2.5". Medium, very full (41+ petals),
cluster-flowered, in small clusters, cupped, old-fashioned, rosette bloom form.
Blooms in flushes throughout the season. Short, bushy. Semi-glossy, leathery foliage.
Can be used for beds and borders, container rose, cut flower or garden.
[Note from Help Me Find] Note from me follows.
The blooms are quite continuous, but you have to keep up to date with dead-heading.
The bush is quite small, the flowers borne above the bush in small clusters. 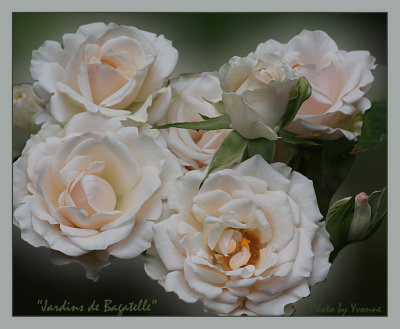 "Jardins de Bagatelle"
This particular rose has a variety of names, including "Karl Heinz Hamisch" and "Queen Silvia"
Pale pink and/or creamy-white in cool weather, fully double with a sweet scent.
Upright and quite strong grower with plenty of thorns, but doesn't like damp weather.
Bred in France in the mid 1980's. 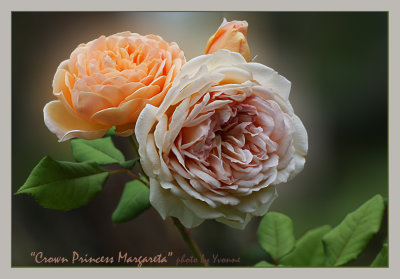 "Crown Princess Margareta"
English Shrub Rose
Neatly arranged rosettes with a strong fruity fragrance
Glorious, neatly formed rosettes of a lovely apricot-orange with a strong, fruity fragrance.
A well-rounded, slightly arching growth. Repeat Flowering Highly Fragrant Ideal for shade.
Notes from David Austin website. Notes from me follow.
A very large & strong shrub that sprawls, so needs space. Can be trained over a large
archway or onto a pillar while young. Not very thorny, the blooms are in clusters and quite continuous. 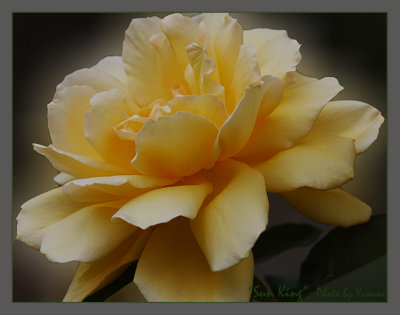 "Sun King"
A lovely rose, the buds are often orange then open to this golden yellow
It has pride of place near some steps not far from the gazebo, though the
flowering can be erratic at times, well worth the wait for flowering.
Bred in France in the mid-70's. 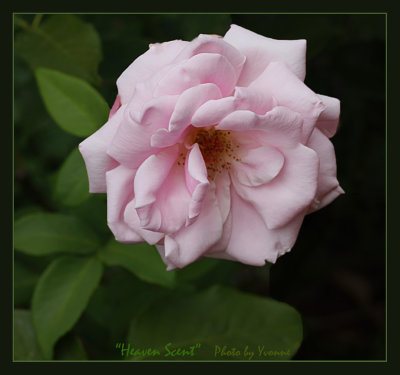 "Heaven Scent"
Introduced in United States in 2004 as 'Memorial Day' and introduced in Australia as 'Heaven Scent'
A Hybrid Tea rose with a strong, damask fragrance. Blooms in flushes throughout the season.

Can be used for cut flower, landscape or shrub.
Large blooms with intense fragrance, old fashioned form.
[notes from Help Me Find]

My notes - only been in my garden for a couple of years, not much to say at this stage. 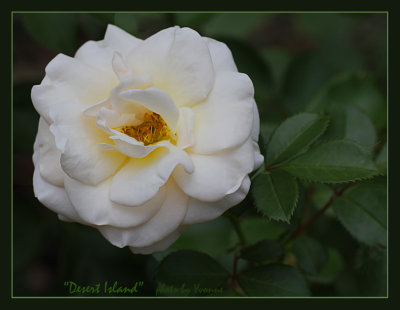 "Desert Island"
Apricot or apricot blend Floribunda. Introduced in United Kingdom by Dickson Nurseries Ltd.
in 2006 as 'Desert Island'. Light apricot, white outer petals, ages to white .
Creamy caramel. Cluster-flowered, in small clusters, open bloom form. Blooms in flushes throughout the season. [Notes from Help Me Find roses]
My notes. This one is a new addition this season, and this is one of the first flowers
too early for me to make any comments, but the bloom is rather plain so far
and a bit disappointing, I can't see any light apricot, perhaps our summer sunlight
is too strong.
click on thumbnails for full image