A few travel moments, for family and friends.
Some taken by me, some by Igor, some by others.

Not the nicest pictures, just a taste of my little adventures here and there.

Please visit "all galleries" to view the photos taken in these countries... 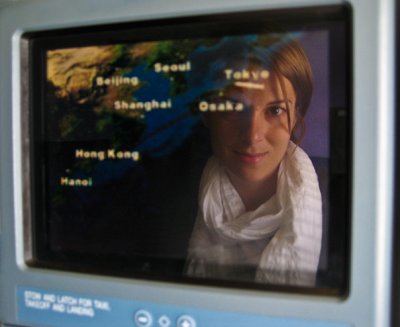 Tokyo to Macau
I always wanted to be an "expat", living in a foreign land (and getting paid for it doesn't hurt either). Finally, it happened: the mandate was in Tokyo, with a very brief dip in Macau. Ok, it was more like a long business trip, but I much preferred to consider myself like a very-short-timer "expat": I had a small apartment Urayasu, a local bus pass and the nearby Yakitori owner knew me by name.
Oddly enough, I've been an true "expat" for more than a dozen years: a French-Canadian living in the States. But somehow, that just doesn't seem to count...
Here I am on a plane from Tokyo to Macau. I was headed for quite a culture shock!
6 comments leave a comment 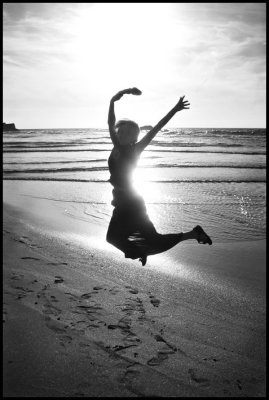 Morocco
This was near the end of our trip.
We were winding down in Oualidia, a little coastal town.
It represents well the mood I was in.
Such a sense of freedom, of carelessness and joy...
Ah, vacations!
(Photo taken by Igor)
5 comments leave a comment 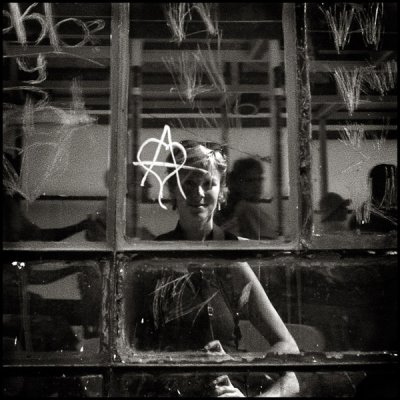 Mexico
Shooting at a vandalized window, with a trolleybus passing in the background.
This was on the outskirts of Oaxaca.
Always nice to have a "I was actually here" pic when traveling.
Always a bit more of a challenge for the solo traveler...
14 comments leave a comment 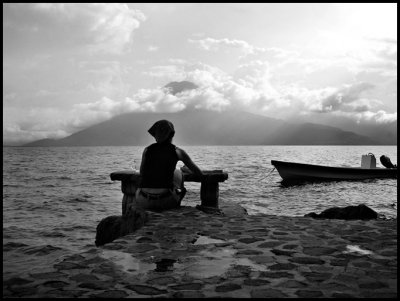 Guatemala
Lake Atitlan... What a wonderful place!
I had originally planned a whirlwind of an adventure in Guatemala, starting off at "La Casa del Mundo", on Lake Atitlan. The minute I saw the Lake, I knew I would stay longer than planned. I finally canceled the rest of my trip and stayed a week there... The first "vacation" I took in a long time.
This little dock was at the footstep of the Casa del Mundo. In front of me, two volcanoes. The perfect spot to relax and doodle in my notebook.
3 comments leave a comment 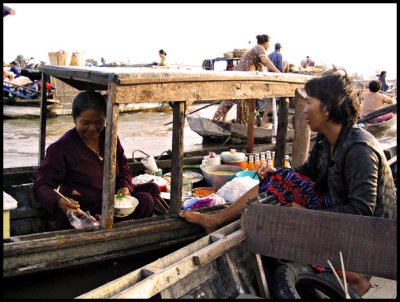 Vietnam
Floating Market.
Early morning.
The woman to the left was fixing me breakfast.
Noodles, orange gooey stuff, purple slimy bits, a sprinkle of green things...
Delicious!
It was at the beginning of my trip and the first moment that I finally felt I was "far away".
1 comment leave a comment 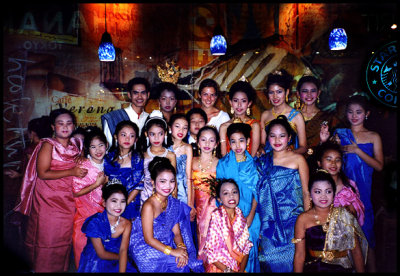 Thailand
I'm standing amongst these small princesses.
I was wandering in the streets of Bangkok when I stumbled upon these little ladies. They were all dressed up to greet the King's niece. Very big deal. Once you've seen the big billboards with the King's face all over the city, you can understand their anticipation.
They were as tickled as I was to take this shot. A picture in elegant poses for them; a really surreal moment for me...
0 comments leave a comment 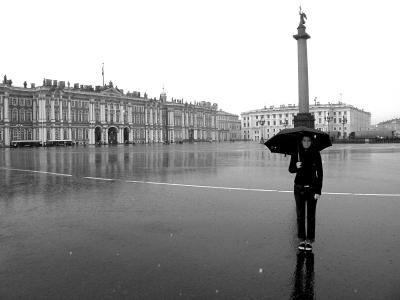 Russia
All happy to go to St-Petersburg, just to get greeted by rain...
On the upside, the Palace Square, in front of the Hermitage Museum was completely deserted. It's such a beautiful place, it was nice to wander all alone.
Although it was miserable weather, this bleek moment is the strongest memory I have of St-Petersburg. Such a lovely, lonely mood...
(Photo taken by Igor)
1 comment leave a comment 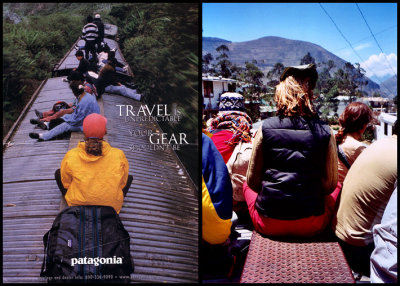 Ecuador
A single image will inspire me to travel somewhere.
Several years ago, I ripped out this Patagonia add from a magazine. Sitting on the rooftop of a train... How cool is that!
Did a bit of research...
And that's how I ended up in Ecuador!
Here's the ad to the left and me having achieved my goal to the right.
(Photo taken by a fellow traveler)
3 comments leave a comment 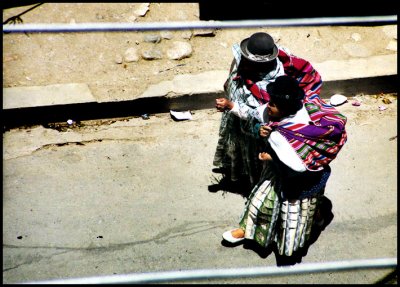 Bolivia
Got sick in Bolivia.
Three days stuck in bed.
The only contact I had with the country was through the small hotel room window.
Here's a snapshot from it.
I would've rather brought back a recording of the street noise... such life!
1 comment leave a comment 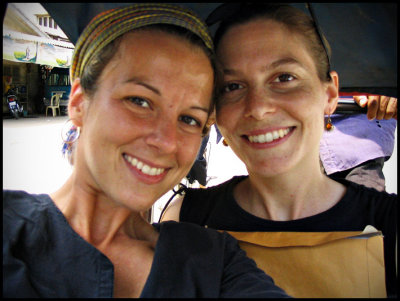 Cambodia
My old friend Melanie and I in a tuktuk.
We met up in Phnom Penh. She had been living in Cambodia for a couple of years and we hadn't seen each other in ages... It was great to reminisce about old high school stories. Back in the day where we exchanged notes while our geography professor wasn't looking, we never would've guessed that we would someday meet in Cambodia... and that for her, it would be home.
1 comment leave a comment 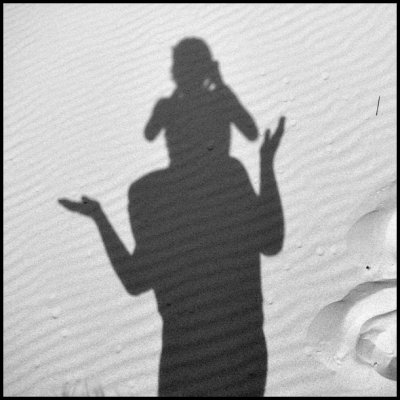 Iles de la Madeleine
"Where's that?", you might ask...
Iles de la Madeleine (Magdalen Islands) is an archipelago in the middle of the Gulf of St-Laurence, in eastern Canada. It is part of the province of Quebec.
It's also where I was born...
Here I'm sitting on Igor's shoulders. It was his first time there. We spent several afternoons walking on the long empty beaches.
0 comments leave a comment 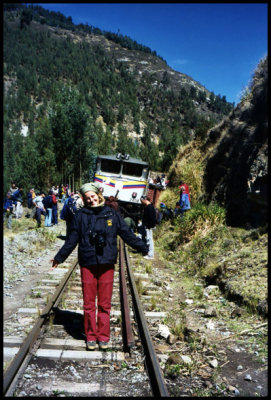 Ecuador
Derailed train.
We were riding on top (yes, top) of this train when... Badang-badang!
It derailed!
We were stuck there for a while.
They finally got the train back on its tracks by... putting rocks under the wheels!
Couldn't believe it!
Riding the rooftop of the train from Riobamba to the Devil's Nose is a great introduction to Ecuador.
(Photo taken by a fellow traveler)
0 comments leave a comment 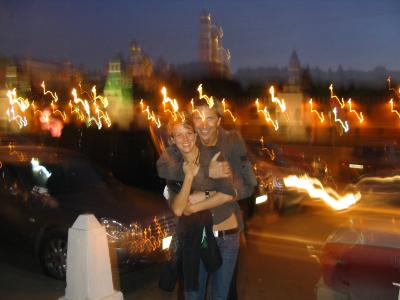 Russia
White nights in Moscow
4am, blue sky
A great night! Dancing amongst Moscow's "beautiful people" at a new hot club in town.
"Face Control" is strong in Moscow's hot spots, you get scrutinized from head to toe. Fortunately, we knew one of the staff members.
Felt like Studio 54 in the 70s... in russian.
Had a blast.
A better time, it seems, than some of the "beautiful people"...
(Photo taken by Boris)
1 comment leave a comment 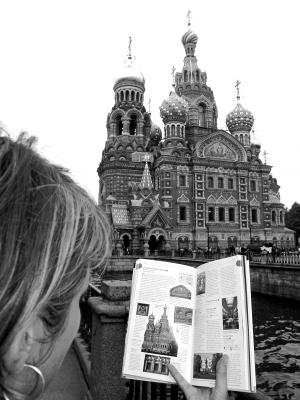 Russia
What I had seen in the guidebook was right there in front of me.
That's when you realize...
Yep, I'm really here!
Russian architecture is truly amazing. A variety of styles.
The churches are the most stunning, very colorful and full of fantasy.
Though it's hard to tell on a black & white picture!