Jafrikayiti Jean Elissaint Saint-Vil: When the Yankees invaded Haiti in 1915, they imposed a set of Mulatto dictators (Dartiguenave, Lescot, Borno, Roy, Vincent). All of whom were criminals who agreed to serve as mere puppets with power to maintain the neo-colonial disorder on the island in favor of U.S corporations.

Stťnio Vincent seen in this picture with U. S. President Roosevelt, July 5, 1934, at Cap Haitien, accepted orders from this white supremacist to bow to his friend Trujillo who was put in charge of the Eastern 2/3 of the island. Having massacred 30,000 Blacks (Dominicans and Haitians) in October 1937, Trujillo was advised by Roosevelt to offer the price of a pig for each ęHaitianĽ, he admits to have killed during the ęPerejil massacreĽ. Vincent not only accepted the payment, he went to the border to celebrate his fellow mulatto criminal Trujillo while Roosevelt applauds. 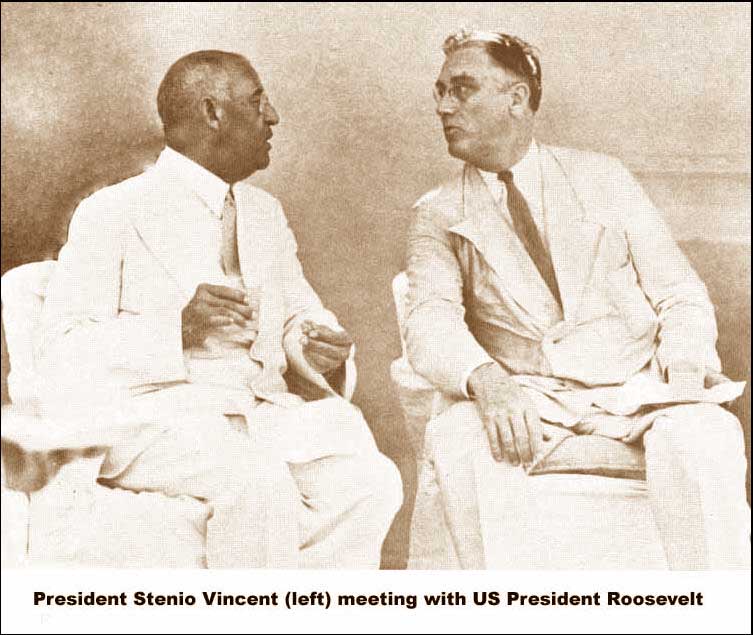 Click to visit jafrikayiti.com for more on Perejil massacre

Wikipedia: After two years of relative quiet in Port-au-Prince, Vincent's failure to press for justice for the slain workers prompted protests in the capital. He took the case to the Dominican government, which agreed in 1938 to compensate the slain workersí relatives the following year, 1939.

October 6, 1936, Vincent was lauded with a song in a club because he had kicked out Syrian street vendors--

Kerlens Tilus: "The emigration of the Arabs to Haiti began in 1880 under the aegis of the Americans who wanted, in the long term, to reduce the European influence in Haiti. All the Arabs in Haiti are American citizens according to the agreement that was signed between their ancestors and the American establishment. It was in 1960 that FranÁois Duvalier signed an esoteric pact with the Arabs who began to have a certain hold in Haiti as straw men to do trade for the Duvalierists.

The Bigio family entered Haiti in 1925 and in 60 years, this Arab-Jewish family eventually imposed its dominion over the whole country of Haiti. Arabs and Jews have always had the unconditional support of the United States of America, especially under the administration of Ronald Reagan. They were the ones who conspired against Jean Claude Duvalier and ended up having his skin to not pay the millions of Duvalierists they had in their hands. Today the Arabs and the Jews have a great disagreement with the American government and we will explain, in detail, this misunderstanding in this article and we will try to bring hope to young Haitians, because we Haitians are at the end of our pains with these leeches Ė these wicked, assassins of Levantines.Ē

Etant Dupain may not say so clearly and completely, but unfortunately in 2019 all of the Haitian street vendors, the market women or madan sara, are being supplied with food and goods by Dominican Republican middlemen, perhaps DR middlemen even having been assisted by President Vincent kicking the Syrians out of street sales in 1936! Wikipedia says that Stenio Vincent accepted money from DR but in his time Haiti was 100% food sovereign and per capita still the richest nation in the western hemisphere, albeit robbed blind by colonialism and French reparations debt for emancipation. 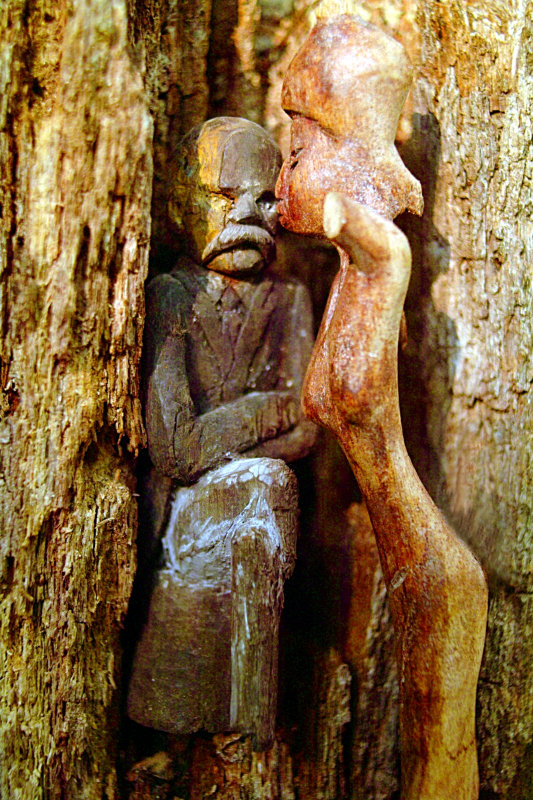 Thanks to Papa Vincent taking bribes from DR and kicking Syrians upstairs from street vending into large grocery stores, much of the food and goods sold by street vendors now come through DR from the US. Haiti was 100% food sovereign in 1915 when the US invaded. The Lebanese and Syrian arabs and jews own the grocery stores. Giant grocery, owned by Lance Durban's son-in-law, went out of business to benefit of grocery store owners Bigio and Boulos and DR middlemen for Petionville market ladies who may be Haitian. Etant Dupain--


Etant Dupain: A Madan Sara is a woman who engages in business activities that connect local goods from the country sides to consumers in the cities. There are different types of Madan Sara. Some Madan Sara are wholesalers; some are retailers; while others buy at retail to resell in even smaller quantities. (For example: buying one bag of sugar and separating that one bag into smaller portions to resell in small quantities, like a can.) Madan Sara do not find the much needed backing because since the 1980s, Haiti has adopted a system of importation/contraband that kills national production. This new structure relies on nonexistent capital within the Madan Sara community because they are the ones who have the most to lose with this system of importation.
Q6055BSKAXLZ31501 SYSTEMLSI S5K5AAFA 1.3 MP
0.00s full exif